The recipe chosen for this week’s Tuesdays With Dorie baking adventure was Lemon Custard Cups. I was pleased to have a break from chocolate-based desserts and thought this sounded like a delightful treat to make on a sunny Saturday, especially since I received lemons in my most recent CSA delivery. But there was something I was even more eager to make this weekend: biscotti. I had an empty cookie jar and a free afternoon, so I decided to make the delicious-sounding Lenox Almond Biscotti from Baking, which had been selected before I was a member of TWD. I opted to make my custard cups with espresso and cinnamon, which was one of the “playing around” versions of this recipe, since I thought it would pair nicely with biscotti. 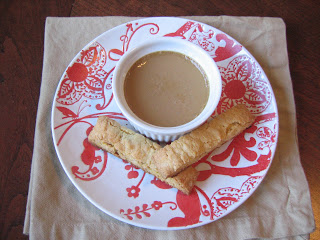 I had never made custard before, except as a base for ice cream, and found it fairly simple to put together. I may have gotten too confident, though, because I think my custard cups were a little overdone. The texture was fine, but they were not “jiggly” as the recipe advised they would be. Overall, I enjoyed making these and love the infinite possibilities for flavor combinations. 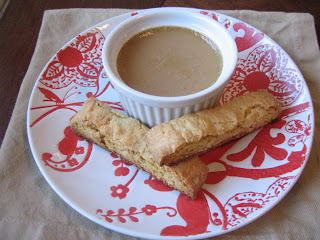 I gave this recipe a 7 for Deliciousness and a 3 for Effort, giving it an EDR of 2.33. Many thanks to Bridget of The Way the Cookie Crumbles for starting off the (almost) spring weather with a nice, light dessert. You can find the recipe on Bridget’ site, and check out other versions of the custard via the TWD site.

I was so excited to see that you made the espresso cinnamon flavor combo because that was my number one pick. I didn't make it but I still think it would have been the best. It seems like this custard needs a big shot of flavor. Lenox almond biscotti is amazing, I love that stuff.

Nice! A double recipe! I skipped the custard and made lemon cakes instead. But I remember we all loved the biscotti. I hope you enjoyed it, too!

Great idea to make the biscotti with the custard! They look perfect together. I'm glad the espresso was tasty since that's the one I plan to try next.

Did you love the biscotti? I've made those (and the lemon) so many times-

The custard was ok, I really wish I had made the espresso variation.

Ooooh, I made the espresso cinnamon combination too! I love the flavors but wasn't a fan of the texture. Glad you liked it!

The custard looks great. I loved making that biscotti recipe!

Great choice. I am glad you were able to make biscotti too!

The Lenox Biscotti sounds like a nice accompaniment to your espresso cinnamon custard. I loved the custard fun. I'll have to try that next. Sounds good.
AmyRuth

OK...forget the cute biscotti and delicious custard...I love those red and white plates!!! Where did you get them?