Last year I set a goal to run a race a month. I managed to run eleven, and then, between the holidays and the acquisition of Ms. Ears in December, I was suddenly incapable of accomplishing anything. I actually wasn’t too bothered about not completing my goal; eleven races plus all the miles run in preparation is pretty good for someone who couldn’t run a mile two years ago. This year I do not have such lofty aspirations, as my primary focus is making sure Ms. Ears gets enough exercise. Fortunately, I still have been able to get plenty of mileage in this year, with and without my dog, so I have a good base if I decide I want to run a road race. And it finally happened today, after several attempts thwarted by rainy weather and other unnatural causes. And it felt fantastic! And not just because I beat Mr. Penpen in a race for the very first time. 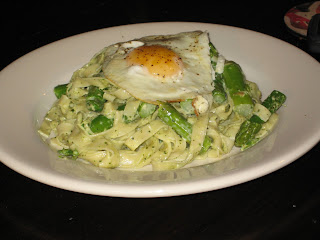 One of the best parts about running races is that it gives me an excuse to carbo-load on pasta the night before. And since it’s asparagus season, I decided to make Giada De Laurentiis’s Carbonara, which is one of our favorite pasta dishes. Actually, it’s so good I’ve even bought out-of-season asparagus to make it before. Here’s the recipe, with my slight modifications and short cuts; the original can be found in here, and also in the fabulous book, Giada’s Kitchen.

Bring a large pot of salted water to a boil over high heat. Add the asparagus and cook for 3 minutes. Remove asparagus with a set of tongs and place in a colander in the sink; rinse with cool water. When the asparagus are cool, chop them in 1-inch pieces. Add the pasta to the same pot of water and cook to your liking. (Or your boyfriend’s. I’m not picky, but I call Mr. Penpen “Mr. No Dente.”)

While the water, asparagus, and pasta are boiling, you’ll have time to make the Basil Aioli. Roughly chop the basil and garlic, then toss in the food processor and pulse until both are finely chopped. Then add the salt, pepper (black and cayenne), lemon juice, egg yolks, and, mustard to the processor and blend. While the machine is running, slowly drizzle in the oils. I have made the mistake – twice – of not drizzling slowly and ended up with a greasy mess rather than nice fluffy aioli.

When the pasta is ready, drain it in the same colander you used for the asparagus, and mix in a bowl (or the pot) with the aioli, cheese, and asparagus. Melt the butter in a skillet over medium heat. Add the eggs, sprinkle with salt and pepper, reduce the heat slightly, cover the pan, and cook the eggs to you liking. Alternatively, if you want to be a little healthier, poach your eggs.

Dish out the pasta, place an egg on top of each helping, and serve.

This recipe gets a 3 for Effort and a 10 for Deliciousness, giving it an EDR of 3.33. I highly recommend it before you run a 10K race or if you’re craving a delicious and satisfying pasta dish.

My mouth is watering. This looks delicious. Congratulations on a great race.