From Thursday Night Smackdown, the fine site that hosted First Thursdays and got me to cook duck and oysters, we have a new blog event: Hobo Mondays. First Thursdays were about cooking recipes from cookbooks or magazines; Hobo Mondays are about cooking our own recipes - with a budget of $5 for two people. Pantry staples are not factored into the meal cost, and participants are permitted to determine what constitutes a pantry staple in their household. The $5 challenge daunted me. Although I have cut back on certain expenditures in this dismal economy, food is not one of them. I have always considered myself a fairly practical grocery-shopper and I try very hard not to waste food. Also, since we’re not eating out as often these days, I figure we should eat well at home. I actually did casually mention we make a food budget once, but Mr. Penpen nixed the idea immediately and I did not give much protest. 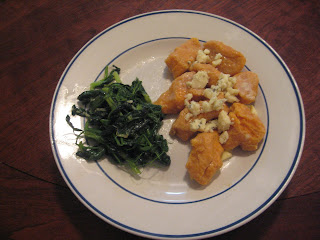 I made some delicious ricotta gnocchi a couple months ago, and it consisted of mainly pantry staples, so I decided that I would try making gnocchi with a vegetable. I had seen butternut squash at Trader Joe’s for less than three dollars for an entire squash; I figured I would only need about half a squash for the gnocchi, use the rest another day, and stay way under budget. Sadly, Trader Joe’s did not have butternut squash (fresh, anyway – there was canned). I went across the street to Whole Foods, and again there was no butternut squash. I decided a large sweet potato would be a good substitute. And yes, I know Whole Foods is pricey, but it was a rainy day and I wanted to get home, not trek to every grocery store in the county. I used the same recipe I used last time as a guideline and started making the gnocchi on Sunday, as there are two chilling periods and time is often tight on weeknights. The first step was pureeing and chilling the sweet potato. The next was to mix the dough, which is where things started to go wrong: it was incredibly sticky. I kept adding more flour, hoping the dough would come together. Finally I gave up; as I was worried all the extra flour would render the pasta to be tasteless gummy blobs. I put the dough in the refrigerator to chill with the optimistic expectation that it would be cohesive after resting. This is what I got: 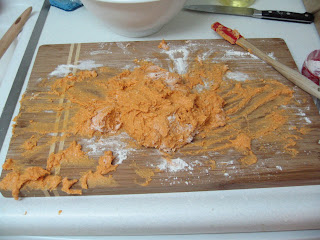 A huge glutenous mess! There was absolutely no way I would be able to form this glob into pasta. I was about ready to throw in the towel and call this “Waste of Money Monday.” However, I do not admit defeat in the kitchen that easily. I scraped the mess into a bowl and back into the refrigerator. I went straight to the kitchen when I returned home on Monday evening, and with an ample amount of flour on the cutting board and my hands, I was able to shape the pasta. I put it back in the refrigerator for the final chilling phase (one hour or up to a day) and went for a run. The gnocchi seemed firm enough when I took them out a couple hours later, so I boiled some water and cooked them. They turned out fine, but not great, you could tell there was too much flour. I served them with some butter and crumbled blue cheese, which, of course, makes any bland food taste better. Since I try to have something green on my dinner plate, I sautéed some about-to-go-bad pea shoots in garlic and olive oil. 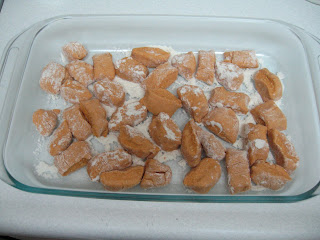 Okay, I guess it’s time to break down the cost of this meal. The only thing I purchased for this meal was the sweet potato, which was $3.24 – I guess I should have gone with the canned squash for $2.29. The pantry staples I used were salt, pepper, butter, garlic, olive oil, flour, parmesan cheese, and nutmeg. I probably used about one dollar’s worth of blue cheese, and the pea shoots came from my CSA box. Apparently they are very inexpensive, about $1 to $2 per bunch, so I’ll say $1.50 for pea shoots, which brings my grand total to $5.74. A little over the $5 allotment, but there was a good amount of pasta left over. Unfortunately, the gnocchi doesn’t stand much of chance next to the other leftovers in our refrigerator. 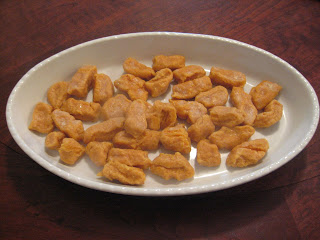 This meal received a 5 for Deliciousness and a 4 for Effort, giving it and EDR of 1.25. If you would like to see how other people fared with a meal budget of $5, there will be a round-up on the Thursday Night Smackdown site on Saturday, where you can also find more detailed information about Hobo Mondays if you would like to participate next month.