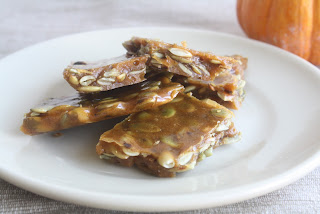 It’s been years since I’ve been in school, but I still manage to have anxiety dreams about not knowing I was enrolled in a class and not having my homework done for the class every now and again. I had one last night, which may or may not have had to do with getting this week’s Baked Sunday Mornings post up. You see, last week I managed to make the recipe, but then due to various factors, did not get around to posting. However, even though I did not pre-write my post ahead of time, this is the first Sunday morning in weeks that I haven’t had a long run or a race on my agenda, therefore; barring any computer problems, which are entirely possible these days,I would have plenty of time to write about this week’s selection, Toasted Pumpkin Seed Brittle. (And there are my Joe Froggers from last week below.) 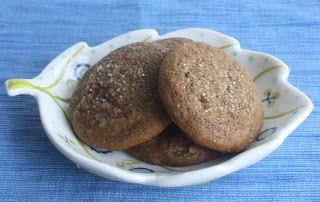 I hadn’t made any sort of brittle in a long time and thought making candy was a fun selection for Halloween week. As I was patiently waiting for my sugar mixture to become “almost clear,” I decided to look at the group’s website to see if any of the other bakers had perhaps mentioned how long this might take, as it seemed to be taking a while. I decided to just push up the heat a little, since low on my stove is really low. I also decided to break out the candy thermometer to make sure the sugar got to 300 degrees, which took eight minutes after the butter melting, which is how long the recipe said it would take. I just get way too nervous about burning caramel, so I like to have the extra insurance of the thermometer rather than just visual cues. 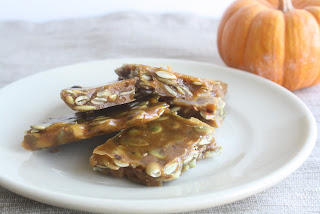 I thought the brittle was excellent. I had thought the total amount of salt in the recipe seemed high, but it ended up being perfect. In addition to the cinnamon, I added a pinch of cardamom, and think it perhaps could have done with a bit more spice. I am more inclined to snack on treats of the nutty/seedy variety than Josh is, so I am thinking the majority of this brittle will probably need be taken to one of our offices tomorrow. You can see how the rest of the group fared with this treat by checking out the other bakers’ links on the Baked Sunday Mornings site.
Posted by margot at 11:20 AM

Looks great! Awesome idea to use cardamom. It's one of my favorites to use and it would be lovely here.

I always feel much more comfortable if the recipe gives a temperature reference instead of just a vague visual cue for cooking sugar, because I have definitely burnt a batch or two in my time (including a batch of this brittle!). Yours looks just perfect!

I love how belonging to this group pushes us beyond our comfort zones. And, in the end, builds our confidence! Very nice!

Love the color of your brittle - it looks absolutely perfect!

And I agree with Susan, this recipe was a great learning experience for the group.

I, too, still have those "Did I register for classes?" dreams.

I agree with Susan. Just the few weeks I've been participating with the BSM group has motivated me to conquer recipes I may have not tried otherwise (and it's fun... bonus!). Your brittle looks great! :)

I definitely like recipes to have temperatures in addition to visual cues - it makes me feel a million times more comfortable! Your brittle looks fantastic!