Tuesdays With Dorie is doubling up on recipes this week and the one I made was Earl Grey Madeleines. My apologies to Kayte of Grandma’s Kitchen Table for not getting to the Honey Almond Fig Tart. I had assumed I wouldn’t be able to find fresh figs. Since they were hard to come by in October, I assumed they would be impossible to find in December. Funnily enough, I did just see some at the store tonight, though well after the other recipe, Earl Grey Madeleines had been made and mostly consumed. We are not what you’d call tea drinkers in this house. We like coffee - strong black coffee. It’s one of the few things we buy in bulk at Costco, along with ten-pound bags of sugar (surprise!) and economy-size boxes of generic milk bones for our voracious eater. However, Josh was required to dress up as a mummy for his office’s Halloween party (he claims there are not any pictures of the mummy crew from the party, a fact I may be verifying when I see his co-workers at their Christmas party next week). He put a great effort into his costume, researching the best way to get the soiled look, and had bought Earl Grey tea to dye the mummy wrappings. Lucky for me, not all the bags got used and I was able to utilize them in this recipe. 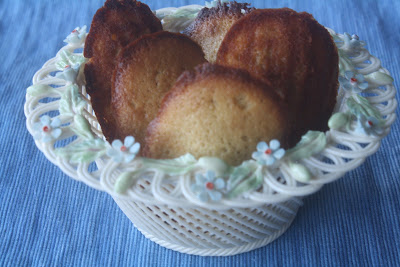 I have now made all the Madeleine recipes in Baking, and they are all delicious and fairly easy to make. My one qualm was that when I strained the tea-infused butter through the recommended layers of cheesecloth, I think I lost more of the butter than I would have liked, because the Madeleines were not quite as buttery and tender as others. Many thanks to Nicole of Bakeologie for a lovely selection. You can find the recipe here on her site and visit the TWD site to see what the other bakers made this week.
Posted by margot at 9:21 PM

No apologies needed, I couldn't find figs either and went with the grapefruit version! I have become the Queen of Tarts, let me just say that of all the things we have made, the tarts are my favorites. I could make a 6" tart every day and I do believe Mark would eat it for breakfast, lunch, and dinner and be ready for the next day. That 6" size is the way to go for small families. Thank you for the sweet comments on my blog this week...and I am so happy to hear that you will be doing the next book as well. BTW, I have made "Margot's Toffee" about 60 times for Matt...it is his absolute favorite candy...so thanks again for the gift that keeps on giving! Hope your holidays are extra happy this year!

Those are cute looking mads in their prim white basket. Perfect for a ladies tea party.

I buy those giant bags of sugar at the warehouse club too (along with bulk butter, flour and vanilla) :) I definitely think a photo of Josh in his mummy costume is necessary!

I missed both recipes this week, but when figs are back in season I'd like to try the tart.

I love madeleines..they are such a nice thing to eat with tea I think..how wonderful that yours actually have tea in them! Lovely

Those look soft, tender and delicious!

Interesting observation about the loss of butter. I think a couple of passes through a fine mesh metal strainer would have been fine, don't you? Your mads look great! I need to make the regular mads; they were chosen before my TWD time.

I wanted to make the Mads so badly, but no pan. Now I have one and I hope mine are as pretty as yours!!!