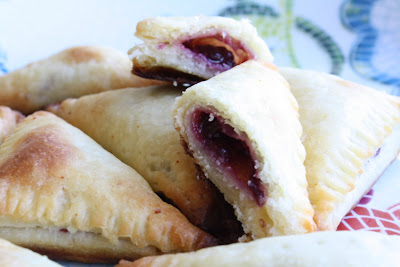 Did anyone watch season two of “Project Runway Canada?” I live in the United States, but my super-awesome boyfriend found episodes of the Canadian version of my second-favorite reality show online and downloaded them. One of the aspiring designers was named Adejoké, but we always misunderstood host Iman’s Somalian accent pronunciation and thought she saying “the other Jacque.” We also wondered who the first Jacque was. Anyway, this week’s Tuesdays With Dorie recipe, Cottage Cheese Pufflets, was selected by Jacque of Daisy Lane Cakes and she is the only Jacque I know of in the TWD baking group. You can find the recipe HERE on Jacque’s delightful blog. 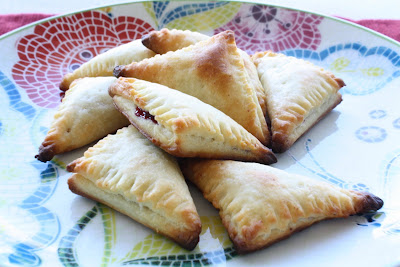 I had a difficult time mustering up too much enthusiasm for the pufflets, but I had in the back of my mind that they may be one of those sleeper hits. I have been skeptical of recipes in Baking before and rarely have they let me down. I am sorry to report that this one did. It may have been because I overbaked them just a touch, but I tried just the tops and the jam center alone, and just thought they were kind of bland and doughy tasting. I think this is one of the only baked goods no member of my household was would eat. Even if I’m not completely thrilled with the outcome, Mr. Penpen will usually consume an adequate amount before calling it a loss. Eloise was left alone in a room with them a reachable level for a minute, which is about thirty seconds longer than it usually takes her to steal baked goods, and she did not devour them. The good news, though, is I apparently did not have the monumental problems with the dough that many other bakers did, according to the Problems and Questions portion of the TWD site. I attribute my success to draining the cottage cheese before making the dough and chilling it about every five minutes during the rolling/cutting process. I had never baked with cottage cheese, but I have made ricotta gnocchi before (yum) and a crucial step is draining the cheese, so I figured it would help with this dough. This recipe gets a 4.5 for Deliciousness and a 3 for Effort, giving it an EDR of 1.5. Please visit the TWD blogroll to see how the other bakers fared with the recipe and hopefully see some better reviews and nicer looking cookies. 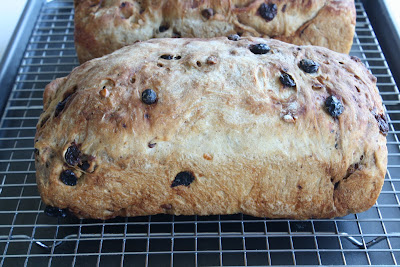 The other good news is that the same afternoon I baked the pufflets, I made Cinnamon Raisin Walnut Bread from The Bread Baker’s Apprentice (after seeing many rave reviews on other blogs), and I think it’s one of the best things to ever come out of my oven. You can find the recipe HERE on Google Books preview. 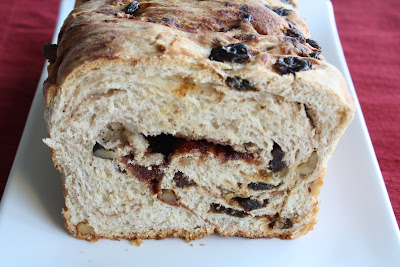 I didn't get to the pufflets, but that bread looks seriously delicious!

If the dog wouldn't eat them, then you should definitely consider it a loss. But that's ok - nothing ventured, nothing gained.

Love the bread - it looks marvelous!

WOW! Those pufflets are some kind of work of art, the picture as well! I'm impressed... what a comeback!

They look Puff Daddy Delicious! Your bread looks great too!

There's a Canadian version of Project Runway?!? I'm suspending all activity until I find it. Pufflets be damned.

Your pufflets look so beautiful! I'm sorry they weren't a success. Congrats on honing Eloise's palate to such a discriminating level! I liked the ones I made with pepper jelly better than the sweet ones, but they were a lot of work and frustration.

I titally agree with you on the cinnamon raisin bread. That was a huge hit here and will get repeated. No doubt you put it on a high shelf since Eloise has such good taste!

Your pufflets turned out great, though I fancy your gorgeous cinnamon raisin walnut bread more.

They look really nice and puffy, but I agree that they weren't spectacular. The bread, on the other hand, looks delicious! I love cinnamon raisin bread.

Tasty, but fussy.Not my favorite.

Thanks for coming by for a visit.

Agreed. These pufflets were not what I'd hoped. But I'd love a slice of that cinnamon bread. It looks perfect.

Even if the pufflets were a loss, that bread looks great! We didn't love them.

Your pufflets look great--and the bread looks absolutely divine! What a double-header!

Your pufflets looks beautiful! I’m sorry you didn’t love them.
Your bread sounds delicious - I like cinnamon bread!

i'm sorry your pufflets didn't come out so great. i am still teetering on whether or not to make em.

but your bread. oh my, your bread. i'm drooling!! i've printed the recipe and still haven't made it.

let me know how that pizza dough fares for you :)

so sad you didn't like these! I've made next week's tart though and I think you'll like it (hope so!)

First of all, Project Runway Canada is awesome.

Second of all, I think draining the cottage cheese definitely would have helped! Good thinking. Too bad you didn't like the finished product.

Sorry the pufflets weren't a hit for you this week. I sort of expected not to like them (especially given that I'd heard the dough was fussy) but they surprised me and I really enjoyed them.

Isn't that cinnamon raisin bread the best?? I made it a few weeks ago and stuck it in my freezer sliced. I've been eating it for breakfast for a while now and I'm fairly sure it's my favorite bread ever! Yours looks awesome and makes me want to go and bake it again :)

My sentiments exactly on both the pufflets and the wonderful cinnamon raisin bread! (Can you tell I'm trying to catch up on my Google Reader? lots of comments today, haha)