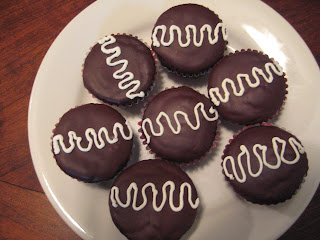 Today is my mom’s birthday. I went to visit her on Sunday, and had planned to make her a special birthday dessert. But there are only so many hours in the day. And on Saturday, after tending to Ms. Ears’s needs (walks, training class, doggy playdate), doing some errands, making my TWD dessert, running six miles, and cooking dinner, I did not have it in me to bake anything. All I wanted to do was plop down on the couch and gorge myself with pasta – and I did. Seriously, just trying to train my dog is a task that would exhaust most humans. So instead of bringing my mom a fluffy birthday cake or fruit tart, I sheepishly handed her a Tupperware container with the Caramel Crunch Bars I made for Tuesdays With Dorie, knowing full well that they are not really her sort of dessert. She was cordial about it of course, but I could tell she was a little disappointed, which she expressed on her blog. (She did also say the bars were delicious, though very rich.) 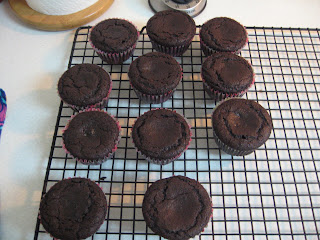 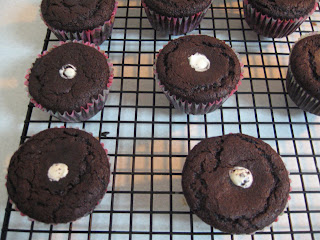 I decided that I should bake my mom the cupcakes I had intended to bring as her birthday treat. The Food Network now has a magazine, and Costco sells magazines at a forty-percent discount, so I picked up a copy. The February/March issued featured an article on pastry chefs, accompanied with recipes by the chefs, which is where I found the recipe for Lulu’s cupcakes. They look, and basically are, like a Hostess cupcake, only these ones are made with real butter, cream, and Scharffen Berger chocolate. 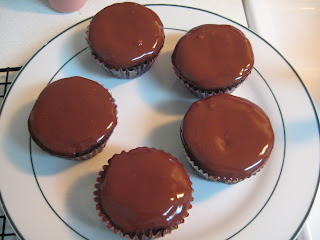 They tasted as fantastic as they look. The cake has an interesting crumb: they are not very moist, but they aren’t dry and crumbly either. The unique texture could possibly be attributed to the large amount of chopped chocolate in the batter rather than the usual cocoa powder (which I threw in a dash of as well). It’s the perfect consistency to hold the delightful marshmallow filling piped inside. I gave these cupcakes a 10 for Deliciousness and a 5 for Effort. They were not necessarily difficult to make, however, there were four separate components to prepare and put together: cake, marshmallow filling, chocolate ganache, and icing. You can find the recipe, which I halved, here on the Food Network site. 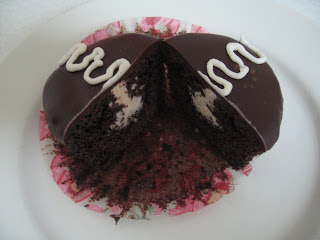 Happy birthday, mom! I think these would have been a lovely birthday dessert for you. I promise to bake you something special next time I see you.