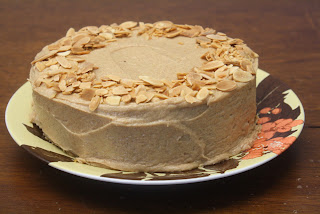 I’ve only been baking with the Baked Sunday Mornings Group for a short time, but this week marks the group’s two year anniversary and we’re celebrating with cake - Pumpkin Almond Cake with Almond Butter Frosting.  I made myself wait until October 1 to begin baking with pumpkin and have managed to make a prodigious amount of pumpkin treats in less than two months.  I finished the end of a can of pumpkin with this cake and think it might be a good time to take a break from pumpkin goodies for at least a week or two.  That being said, this is a fantastic cake to end the pumpkin binge with. 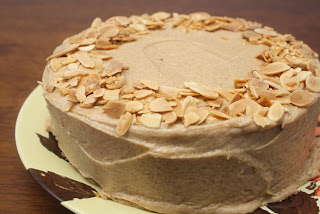 I made a half recipe of the cake in a six-inch cake pan, with enough leftover batter for a tester ramekin.  I wasn’t sure about using almond butter in the frosting, probably because I usually buy chunky almond butter (I thought smooth would be better for this recipe so that’s what I bought), and ended up thinking it was wonderful.  I loved that it was a little more salty than the average buttercream.  I had initially thought I might add some almond extract to amp up the almond flavor, which it did not end up needing at all.  I am happy to have found a new kind of frosting I like so much! 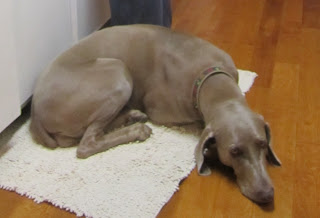 I realized that Eloise has not made an appearance since I started blogging again, so this marks the return of Monster Cuisine.  We just got this mat to go below the sink in the kitchen and she thought it was a new pad for her.  You know, since of course we want a food-obsessed Weimaraner as close and comfortable to us as possible while we are cooking!

Anyway, if you would like a delicious cake recipe, head on over to the Baked Sunday Mornings site.  You can also see if the other bakers enjoyed it as much as I did by viewing the bakers’ links.
Posted by margot at 11:05 AM

I love that you frosted the whole cake! It looks wonderful! Glad someone else is as obsessed with pumpkin as me. I have a bit of pumpkin puree in the fridge that I need to use up and am thinking today is the day I try the pumpkin cinnamon rolls. :o)

I also used the chunky almond butter and we loved it in this frosting. Your cake is beautiful with frosting all around...I like this frosting so much that I'll make extra next time and frost the entire cake just like you.

That frosting sounds so amazing - I've recently become obsessed with almond butter. I just got a copy of Baked Elements from my library and there are so many recipes I am dying to try! Hope you had a great holiday weekend :)

Very nice, Margot! I like that you frosted the sides, too.

Doesn't everything belong to our pets?

Your cake is gorgeous!

It looks beautiful fully frosted. I felt the same way about this cake and love the frosting and that it was so easy to make in the food processor.

And super cute dog. We didn't know it until a few months ago, but our dog is 25% Weimaraner (there's a doggie DNA test, it's not weird that I did it on my dog, right?) :)

I too love how you frosted the cake all the way around! It gives it a more elegant look-- you could put that cake on any dessert table! :)

What a great looking cake. And almond. Be Still my Heart.