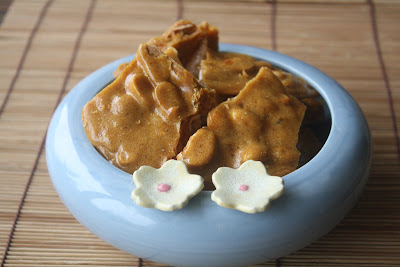 This week’s Sweet Melissa Sundays selection is Peanut Brittle, and is actually the second brittle recipe chosen this month; the first being cashew brittle two weeks ago. The initial reviews of the cashew brittle recipe didn’t exactly inspire me to try the recipe (you don’t really want to hear the words burned and chewy when you’re talking about brittle), but I still wanted to make brittle, so I looked up a couple recipes online and got to work. I didn’t post about it because it wasn’t the recipe from the Sweet Melissa book – or I just felt lazy. Or busy. Unlike many of the sugar-boiling experiences in my kitchen, the cashew brittle I made turned out well and disappeared pretty fast with just the two of us eating it, which is always a good way to determine if a recipe is a success. I decided to give it another go with peanuts. 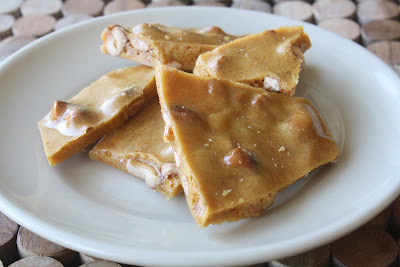 I think Josh has tried every single flavor of Ben and Jerry’s ice cream and one of his current favorites is peanut brittle. I had been on a bit of an ice cream making hiatus, due to Josh actually not liking a flavor I made (for some reason I just kept expecting him to finish it). I decided it was about time he stopped buying endless pints of ice cream, and I made some vanilla ice cream and swirled in some crushed peanut brittle. I also added some chocolate chunks to the ice cream, ‘cos why not? 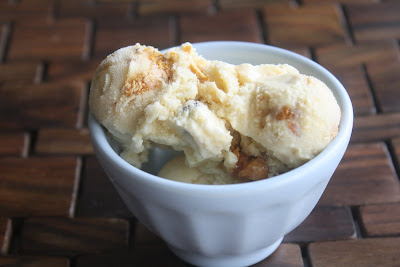 The brittle recipe gets an 8 for Deliciousness and a 2.5 for Effort, for an EDR of 3.2. Many thanks to JoVonn of The Givens Chronicles. You can find the brittle recipe from the Sweet Melissa book on JoVonn's cute site and visit the SMS site to see how the brittle turned out for the rest of the group.

Line a baking sheet with parchment paper and spray with nonstick cooking spray. Combine the baking soda, cinnamon, and cayenne pepper together in a small bowl and set aside. Also set aside the two tablespoons of butter (these ingredients will all be added at the end and I’ve learned the hard way you want to have everything ready and conveniently accessible when making candy).

Once the thermometer reaches 300 degrees, remove the pan from heat; immediately stir in butter and the baking soda/spice mixture. Pour the candy onto the prepared sheet and spread with a greased spatula. Cool the brittle completely and then break into pieces, either by hand or with a knife on a cutting board.
Posted by margot at 10:03 PM

Your brittle looks perfect. I'm glad you found a recipe you like.

The brittle looks awesome, and I love that you added it to ice cream for Josh. I think he's a bigger ice cream fan than Shane, which is saying something :) I sat out both weeks of the brittle making - we're just not fans here so I was too lazy to give it a shot just to give it all away.

Your brittle looks delicious and would be a wonderful addition to ice cream - I'm going to have to try that!

Glad you found a recipe you liked. I giggled when I saw cinnamon and cayenne pepper :o) I bet that the ice cream had a nice cooling effect after the cayenne starts working.

Can I come over next time?

Thanks for the comments on my blog. I'm feeling great!

This looks great! I love the idea of adding it to ice cream. I think I'd like it better then.

That looks really good, and extra-good mixed into the ice cream! My sister-in-law makes cashew brittle every Christmas; I may need to take some of that and add it to homemade ice cream.