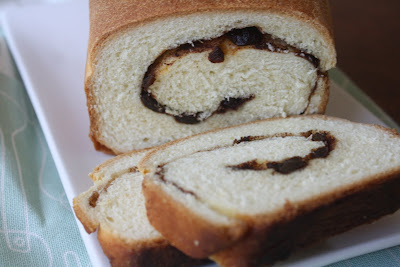 Just last Tuesday I mentioned that I hadn’t made Josh too many breakfast treats recently, so I was delighted that this week’s Tuesdays With Dorie selection, Raisin Swirl Bread, would provide breakfasts for him this week. There aren’t a lot of yeast bread recipes in Baking and I’m always happy when they’re selected, since it is so satisfying to bake yeasted treats. The dough came together quickly and rose beautifully – seriously, it seemed enormous! This bread was meant to be baked in a 10x5 inch pan. I had baked an amazingly good cinnamon raisin bread from The Bread Baker’s Apprentice a while ago, which was divided in two portions and baked in smaller pans (8x4?). I noticed the proportions of ingredients were similar, so I divided the dough in two parts to make two loaves. I baked one yesterday and I’m hoping the dough will last in the refrigerator another day or two and then I will make a second loaf. I used the ingredients (cinnamon, raisins – not quite as many as the recipe called for, sugar, cocoa) in the recipe for the first loaf and I’m thinking of adding chocolate chips and hazelnuts to the swirl for the next one. I’m pretty sure I’ll see some inspiring ideas from other bakers, though. 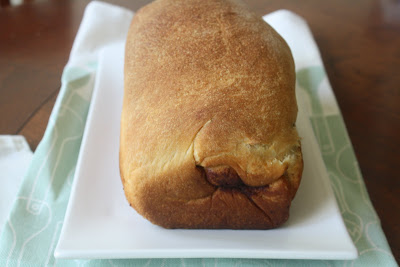 I was pleased with how the bread turned out. It was slightly misshapen and the swirl could have been a bit more dramatic, but those are minor complaints. I haven’t sampled it yet, but Josh enjoyed it for breakfast this morning. I suspect it will be extra-good toasted and sprinkled with some more cinnamon and sugar. Josh rated the bread an 8 for Deliciousness and I gave it a 3.5 for Effort, for an EDR of 2.28. Many thanks to Susan of Food.Baby for a great selection. You can find the recipe here on Susan’s site and visit the TWD site for more swirly goodness.
Posted by margot at 7:48 AM

No raisins for me.

I'd rather eat grapes.

my swirl wasn;t as dramatic as I'd hoped either- but the taste was great!

Hope you have sampled it by now...it was so good. It lasted about 20 minutes here with the guys...long enough for me to shoot the photos and them to toast it all up. YUM. Yours looks delicious!

Your swirl looks good to me - lots of cinnamon and raisin goodness! I think you had the right idea by making two smaller loaves, especially since you can vary the flavors in the swirl that way. I liked the BBA recipe a bit better than this one but it was still tasty. Hope you enjoy it!

Looks perfect! This was so good. Easy and good!

This one was a goodie. The hazelnut version would be good, I'm sure.

Good idea making two loaves. I had wanted to make the french toast, but once the loaf was cut it disappeared in minutes. Next time!
Mimi

It looks great! What a good idea to divide it into two. I bet a version with chocolate chips and hazelnuts would be wonderful.

Um Yum.... your variations sound delicious. I think more chocolate is good, there's never enough. he he
Your bread looks very pretty and the texture looks nice as well. Glad Josh liked it for breakfast.
Thanks for stopping by
AmyRuth

the crumb for your bread looks amazing!! ooooh and chocolate chips in the second loaf?? that just gives me ideas!!

Swirl not important - taste is and it looks like it tasted great.

I wanna do it again, with more cinnamon and maybe some cranberries, or pecans, or....

Baked goods, like people, should be judged by their good qualities not how they look. I think this one was a winner in both flavor and looks and that you're being a tough critic! I sure wouldn't turn down a slice toasted...