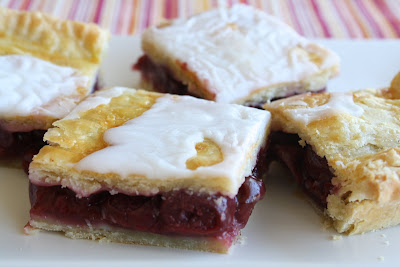 Thanks to all who commented on my giveaway post and/or entered. If you didn’t specify what your favorite cake was, I assumed you did not want to enter the giveaway (I know a lot of bakers probably already own Baked: New Frontiers in Baking) and were just being nice and leaving comments. I entered the number 27, the total number of comments, into a number generator on random.org and the number 17 came up. Here’s the winning comment:


congrats on 100 posts!! i'm at 13... whew, long way to go!! does cheesecake count as my favorite cake? its not technically a cake, but its not a pie... but its my favorite. i've never met a cheesecake that i didn't like :)
Congratulations to Jeannette of The Whimsical Cupcake! Jeannette, please email (monstercusine.margot@gmail.com) me your address so I can send you the book. And I think cheesecake counts as a cake! 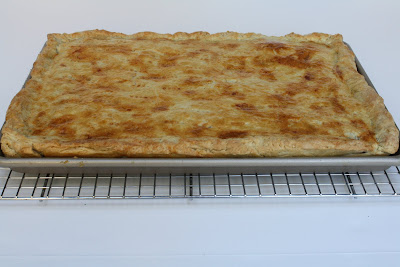 Onto the pie! Mr. Penpen was going to be seeing his friends on Saturday evening and I usually send him with goodies. I was tempted to send him off with the imminent TWD cheesecake brownies, but I realized that I have plied them with three different types of brownies in the past few months (I mean, it makes sense – brownies are portable and always a crowd-pleaser), so I decided I should bake something else. In my giveaway post, one of Mr. Penpen’s friends commented that his favorite cake is cherry pie, which presented me with the perfect opportunity – seriously I had been wanting to make it all summer and haven’t had a great excuse – to try this Sour Cherry Slab Pie from Smitten Kitchen. 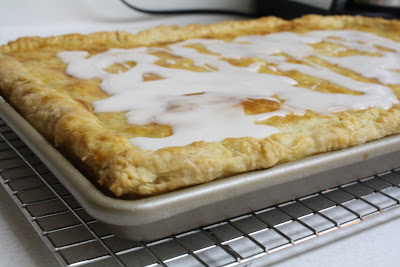 I was a little intimidated by the prospect of rolling out enough pie dough to cover a 10x15 jelly roll pan, but amazingly enough it was not terribly troublesome – a little bit, but really not bad. I used Trader Joe’s jarred Morello Cherries for the filling, as sour cherries are not available in California, which worked fine and were very tasty. I had a lot of fun making this pie and look forward to having more occasions to make giant slabs of pie. You can find the recipe HERE on Smitten Kitchen and the recipe for the pie dough HERE (I decided I'd finally try making pie dough by hand rather than with the food processor and I’m happy to say, thanks to the thorough tutorial on Smitten Kitchen, I’ll do it again). This recipe gets a 9 for Deliciousness and a 3.5 for Effort, giving it an EDR of 2.57. 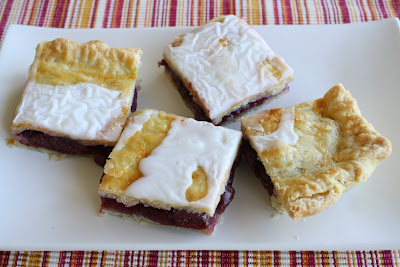 A fantabulous pie Margot! I heart cherries, and this pie looks like a great way to showcase them.

Thank you SO much Margot, for the giveaway!!! I emailed you my information.

I had this pie bookmarked when I saw it on Smitten Kitchen but I was a bit intimidated myself. I guess its time to buck up and make pie crust from scratch *gulp*

I tried leaving a comment and I think it got lost in cyberspace - or not. So if you see two from me you'll know why.

Congrats to the winner. That is a great cookbook.

I've been wanting to make this pie too. I'm glad it turned out well. It looks pretty.

The idea of a slab pie is fantastic and really makes sense. I don't usually like the fluted edge of the pie crust. Your cherry pie bars look mouth-watering good.

i have also been wanting to try this recipe--glad yours turned out so great!

The cherry pie bars were awesome! Thanks so much... but for the record, I would NEVER get tired of brownies, especially if they involve cheesecake.

Those Cherry Pie bars were the best (THE BEST!) late night snack ever. Don't listen to Dave and just send more pie next time. Thanks! Cherrrrrrrrrry Piiiiiiiiiiie!