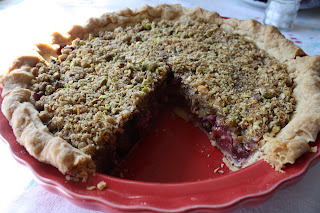 This week’s Sweet Melissa Sunday recipe was Sour Cherry Pie with Pistachio Crumble. I typically bake my SMS recipes earlier in the week and bake my Tuesdays With Dorie on Sundays, but I actually made the pie today. I was looking forward to trying this recipe since I enjoy making pies and Mr. Penpen and I are both big fans of crumble topping. My mom rides her bike to work every day, and unfortunately, she was recently in an accident and got pretty bruised up. When I spoke to her yesterday she wasn’t sure if she felt like company, which I totally understand since even if it’s just immediate family it can be stressful (especially when it involves an energetic dog), but she was feeling better today, so we drove down to see her and brought the pie to share. 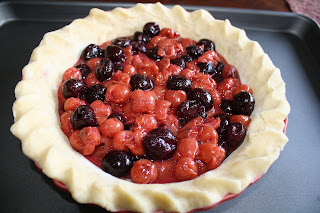 I’ve noticed that whenever a recipe calls for an obscure ingredient, it elicits a lot of discussion on the Problems and Questions section of the SMS or TWD site. For this round, the ingredient was the sour cherries. Until this week it had never occurred to me that I have never seen a fresh sour cherry here in California. (And really, why would it?) I had sweet frozen cherries, leftover from making this awesome coffee cake, in my freezer, so I used a combination of those and canned sour cherries. When I read the pie recipe, I was pleasantly surprised there was no partially baking the crust or cooking the cherry filling ahead of time, so the recipe came together a lot quicker than most pies I’ve made. I recently got over my phobia of making pie dough, but I still haven’t been adventurous enough to deviate from the first recipe I was successful with, which is Cook’s Illustrated Foolproof Pie Dough, so I used that. At the last minute I almost tried Melissa’s recipe, but I hadn’t frozen quite enough shortening for it, so it will wait for another time. 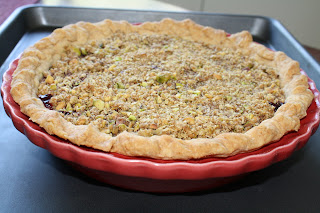 We all really liked the pie.The cherry filling was sweet but a little tangy, and I appreciated that you could taste the pistachios and the oats in the crumble topping, rather than just flour and sugar. I gave this recipe an 8 for Deliciousness, but Mr. Penpen gave it a 9 and my mom really liked it, so we’ll call it a 9. I gave it a 3 for Effort, giving it EDR of 3. Many thanks to Michelle of Flourchild for choosing this great recipe, which you can find on her site. Michelle is a runner like me, so I think it’s cool that she also blogs about running sometimes. I'm sure there are a lot of running blogs out there, but I already spend enough time reading food blogs, so it's nice when a couple hobbies are combined. And be sure to check out the SMS blogroll to see what the other bakers thought of this pie. 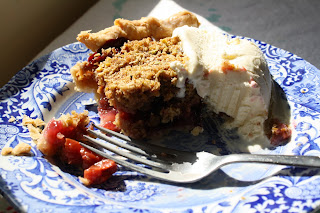 Oh, and on Friday night I made this Buttermilk Ice Cream from Smitten Kitchen to pair with the cherry pie, but since my mom lives an hour away, it did not make the journey to her house. She did have vanilla ice cream on hand, which was wonderful with pie. However, I encourage anyone with an ice cream maker to try the buttermilk ice cream this summer because it is fabulous. 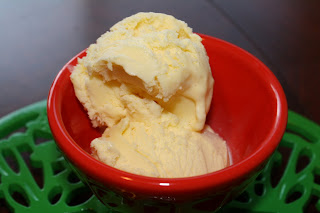 I didn't have any luck with the pie dough suggested in the cookbook, but I'll have to try your Cook's Illustrated recipe. I love every recipe I've ever tried from that magazine!

Hey very nice looking pie. Im sorry about your mom, what a drag. I hope she is feeling better. That was so sweet of you to share your pie with her. Im glad everyone liked it. I will have to post my pie crust recipe. I did not use the one in SM cookbook. I have one I use all the time and it never fails me..I guess that's why they call it No fail pie crust! Take care and keep running!!

I couldn't resist, I had a piece of this pie for breakfast this morning (thanks for leaving some here). I rationalized it by saying to myself "How different is this piece of pie from the fruit/nut scone I was planning on buying at Peets this morning?" They both have fruit, nuts and grains. The only difference is that this pie if scrumptious. I love the sweet nutty topping in contrast with the teeny bit tangy fruit filling. I love your crust recipe. Generally I don't even bother eating the crust of a pie but this one is delicious - every time you make it.

I feel like I'm on a scavenger hunt sometimes when we are asked for an unusual ingredient, but the middle eastern markets have a lot of things I have never seen and that's where I found the frozen cherries. Nice looking pie and I need to try that pie dough from CI.

You know I am already on an ice cream mission this summer, so I'll just add another one to my to-do list!

The crust looks absolutely fabulous - such a cool crimped edge! I loved this pie too - definitely worth making again!

I do have an ice cream maker but have never had/made buttermilk ice cream. It sounds delicious!

BTW, I try to do the same thing with my twd and sms recipes. But am not always successful. Sometimes we just get too darn busy.

P.S. I'm glad your mother is okay, but that sounds scary.

Buttermilk ice cream sounds delicious! I have several ice cream makers so and I am always trying something new. This will be a must try. It is nice to hear another person enjoying running. I have recently decided to try my first race. I am keeping simple, a 10-mile run. I never knew I would be this nervous!

I am sorry to hear about your Mom but what a great daughter to take the pie and share with her as a pick-me-up. =)

Okay, I will definitely give that buttermilk ice cream a try, too. I didn't make the pie, but I hope to soon. It looks wonderful. And I hope your Mom is feeling better!

Your pie looks yummy! I liked this recipe.

Your pie looks so fantastic! I'm glad you were able to share it with your mom - sounds like she's had a rough go of it lately. I tried Melissa's pie crust recipe and had some problems with it but maybe you'd have more luck!

Your crust is so pretty. I love the way you pinched the edges. It sounds like sharing sour cherrypie ended up being the a sweet pick me up after her accident. I hope that she is doing well. It's been years since I've had buttermilk ice cream. My great grandmother used to make me churn it in an old can, surrounded by tons of ice and salt. My mother used to make an ice milk. I may have to attempt my own versions of the two very soon. Great post and pictures.

Ooo, I bet that buttermilk ice cream would be fabulous on a hot piece of this pie! I was pleasantly surprised by this pie. Yours looks absolutely fabulous. You look like you handled your pie crust like a pro!! Glad your mom is feeling better, by the way!