It’s Tuesday, but I shirked on baking for Tuesdays With Dorie this week. After hosting my--very first--Thanksgiving last week, I channeled all my domestic energy into knitting rather than baking. I have been meaning to post about this pear tart, though, so here is a Tuesday post, with a little Dorie thrown in.

I have received four CSA boxes, and three have contained pears. This has posed a bit of a problem as, I am a little embarrassed to admit, I don’t really like pears unless they are macerated in sugar. Instead of trying to appreciate the nice fall fruit on its own, I have been turning the pears into desserts. The first two times I made crisps, which were very easy and delicious. I had been eager to make a cranberry-pecan tart the week the third batch of pears arrived. I decided a pear tart would be a good compromise: I would still get to make the type of dessert I wanted and I wouldn’t feel guilty about not using the fresh produce in my kitchen.

I then set upon a mission to find the perfect pear tart recipe. I consulted several different cookbooks and searched the internet, and ended up making a hybrid recipe from three different sources. The crust was The Art of Simple Food’s Sweet Tart Dough (Pate Sucree), the pastry cream was from Chez Panisse Fruit (with inspiration from Dorie Greenspan for the almond flavor), and the instruction for poaching the pears came from Dorie’s Baking: From My Home to Yours. 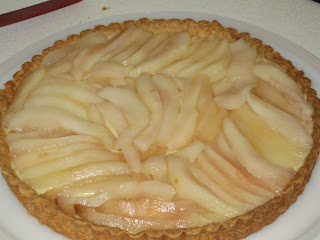 Pulse the flour, sugar and salt in food processor for approximately ten seconds. Add the butter and process until the dough is crumbly. Once the dough is crumbly, add the egg yolk and vanilla, and pulse until incorporated. Remove the dough from the processor and knead until no flour patches show. Form dough in disc and refrigerate for at least four hours. Roll the chilled dough on a floured surface into a twelve-inch circle and shape into a nine-inch tart pan (it could also be patted in rather than rolled). Lightly prick the dough to prevent air bubbles from forming. Chill the dough in the freezer for thirty minutes. Remove the shell from the freezer and bake for fifteen to twenty minutes at 350 degrees. Since the dough is very cookie-like, the recipe calls to bake blind. My crust puffed quite a bit, so I would use weights next time. Remove the pan from the oven and cool.

Mix flour and sugar in a bowl. Warm the milk and salt in a saucepan over low heat. Whisk in flour and sugar mixture when milk is warm, about five minutes. Whisk for about eight to ten minutes, until flour mixture is fully integrated to milk; it should look thick and creamy. Whisk egg yolks in a bowl, then add to mixture and cook for one more minute. Remove pastry cream from heat, stir in the almond extract and butter. Refrigerate until cool.

Poached Pears, adapted from Dorie Greenspan’s Baking: From My Home to Yours
4 medium-sized pears
1 cup sugar
water
lemon juice (from one lemon)

Peel the pears, leaving them whole. Place water, sugar, and lemon juice in small saucepan and bring to boil. When liquid is at a boil, add pears and reduce heat so the syrup is simmering. Simmer the pears until tender, which should take about fifteen minutes. Remove saucepan from burner and cool pears to room temperature.

When all components are cool, slice the pears, fill the tart shell with pastry cream, and top with the sliced pears.
Posted by margot at 9:13 PM